May is Mental Health Awareness month and I’ve been super encouraged by people who have raised awareness about the reality of mental health. So many more people struggle with this reality than we think…from anxiety to postpartum depression to anxiety disorders some of us have never heard of. Mental health issues span wider than we may realize. Maybe it’s affecting you or someone close to you and you haven’t been able to put a diagnosis to the darkness, numbness, or unexplained symptoms until now. 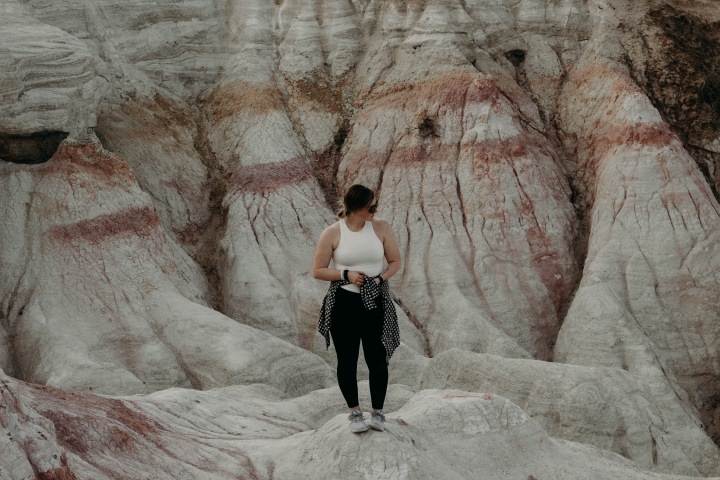 I’ve had friends from different seasons of life reach out to me telling me their own personal stories and struggles because of what I’ve shared on my posts. I have friends (and myself included) pursuing counseling degrees because we’ve realized the importance of mental health and we want to help others regain their footing and control over their minds.
It’s real and it’s that important.
My personal struggle with mental health began in high school which coincided with disordered eating. I danced all the way through high school but at one point I was told that I was too fat to go on pointe. That ended up not being true. The opinion of one instructor didn’t change my future and I did go on pointe. Yet there was damage done. The way I viewed my body, myself, and my worth made me anxious and depressed because I felt like I would never look the way I wanted to in my costumes, or look the way I would to be approved of. I would never be able to put on a bikini because I was afraid of other comments.
When I would lose a little weight I would hear “Wow! You look like you’ve lost some weight!” So I was over weight before? Obviously where I was right now was better than I was before?
I’m just going to say this…the comments you make will continue to make or begin to break someone. Our view of “health” should not be “skinny”. Don’t confuse the two and don’t make someone else feel like the are unhealthy because they might look different than they used to.
It’s true for me. I am using better products for my body, eating better than I ever have, and I am not as “small” as I was my senior year of high school.

Part of improving my mental health was learning that I had to eat what’s good for me, do what’s good for me body, and to not listen to what the world identifies as “good” cause I was never going to get there.
My disordered eating was only part of my mental health journey. The other part of my mental health journey started in college, so I thought. Really it started when I was about seven years old as I found out when I started counseling in 2016. In 2015 I began starting to have panic attacks. I would worry so much (about things I can’t even recall now) and the connection that our minds have to our bodies is strong, y’all. I would obsessively worry about a situation (work, family, relationships, you name it) soon I would start to cry, then a tightness would rise in my chest and I would begin hyper ventilating. Nothing could calm me down. Sometimes it would be the hyperventilating first, the tightness would rise in my chest and I would start to gasp for air before I started to cry because it was happening again. Eventually when I would be able to breath a little bit, I would make a phone call to someone I trusted.
One day in the fall of 2016, after panic attacks had made me pull over on the side of the road, leave work, and walk out of class for over a year, I had three in one day because of a work situation that wasn’t even a big deal. However, my brain got used to over reacting, obsessing and compulsively worrying about things. I made the scenario up to be something that it wasn’t, to believe that people were mad at me when they weren’t. I called my mentor (many of you faithfully know her as K-Tam) and she told me that I needed to go to counseling. There are probably 3 scenarios in the entire time I’ve known her that she’s told me I HAD to do something. This was one of those three. I listened because I knew she meant it.
However, when I went to counseling I realized when we drew out the timeline of my life that my mental health journey began at the age of 7-8 because of two things. That’s when I really began to fear death (not as much for me, but death of a close family member mainly) and I began to fear the unknown because my Dad lost his job in the recession. Our stability was now in limbo and it meant my parents had to make hard choices, it meant my mom fell into deep and dark depression and anxiety, and it meant that I began to believe a lie that I could petition my way with God.
My counselor explained to my that me Dad losing his job and the aftermath of that is considered trauma. Sometimes we think that trauma is only death or disease or horrible circumstance. Trauma comes in many different forms. When we are between the ages of 8-12 our brain is in a developmental stage where we began storing up experiences and our brain is wired with how to react.

When my counselor explained this to me it made so much sense. So much sense as to why as a 21 year old I was fighting the root of this mental illness that had just manifested itself in other things as I got older.
Even after years of counseling, I am still struggling with it. Especially as Brandon and I were getting married. That’s too much to include here, but I plan to write another post about that season and battling anxiety then. However, what I have to include is what was stored in my brain from the age of 8…
Is something that I have to actively work against as I fight for my mental health.
These fears don’t go away with an over priced Starbucks or buying clean beauty products, even though I am a fan of both of those things. It doesn’t go away reading a book or numbing out with Netflix. It doesn’t go away asking people to confirm your fears are nothing to worry about. Even though these are all good things at the appropriate time or place, it’s not the answer when learning to let go of our deepest fears.
The only way to get mental clarity, to actually have mental health, and truly find joy is to do the work that’s necessary to rewire our brains. Sometimes we have to rewire it from trauma, sometimes we have to rewire it from some bad habit, sometimes we have to rewire it from spiritual attack…but if we don’t (whatever your situation is) we will end up holding those things we fear because it will self manifest, it will rob us of life and of joy, and our mental illness will control our lives.
But it doesn’t have too.
It does not have to control our life.
You just have to be willing to do something about it.
That might mean being brave enough to ask a friend for a counseling recommendation. I did and it was the biggest blessing and the best decision I have ever made for myself. Even though I had to dig up and revisit some hard things. Even though there are days where I wanted to run out of the room because of healthy challenges that felt too hard and too vulnerable.
Even though it might mean you have to DO something.
You will have to do something, it doesn’t fix itself. It doesn’t magically go away.
Do it, because self medicating will only get you so far.
If you want real change, it might mean you need a professional, a guide, and accountability. A good counselor will be all those things, and it might take some time to find the right one. A good one will also help you do that.
So here’s a recap of what I’ve learned about mental illness and mental health…
My disordered eating wasn’t a surprise to me, but at the time I didn’t say anything about it because it felt too big. I didn’t want anyone to try to swoop in. My greatest fear is that someone would agree…”yeah, you need to lose weight” would have knocked me off my feat and I’m not sure if I would have been able to get up.
My fear of death and uncertainty? That still feels too big for me right now. I’m still in counseling for it, I’m still processing it, and I’m still working on how to switch on my brain.
I am sharing it because maybe you are like me and your fear, obsessive worrying, and what you put off as problem solving is making it hard for you to sleep, or you’re having a panic attack and you don’t even know that’s what it is…you need to know you’re not alone. You need to know that what you are afraid of isn’t too big to voice, and if you voice it (even just to one person, not a social media blast) then it might be your first step to healing.
Even if it feels like that you saying it is the most vulnerable thing you might ever do,
I promise it will be worth it.